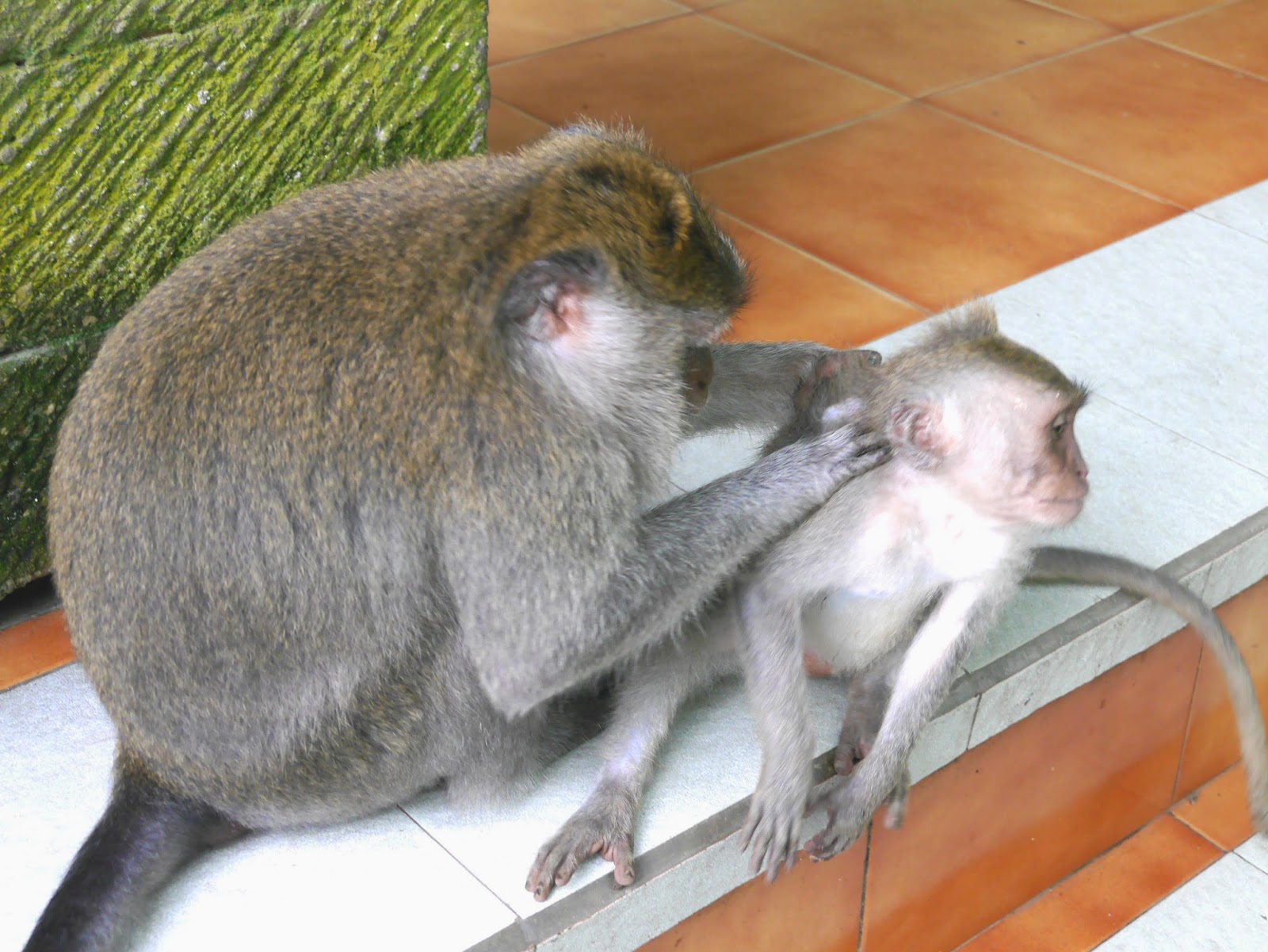 As I’ve mentioned, we got the driver to drive us around. First stop: Babi Guling. We read about how Babi Guling is the signature dish for Ubud and was looking forward to it. And contrary to popular belief, not all Indonesians are Muslims. Many in Bali are actually Buddhists and able to consume pork.

Babi Guling refers to suckling pig skin and the dish is coupled with side dishes and rice. So the driver brought us to this famous eatery for their Babi Guling.

Some crackers that J would always purchase before having his meals. Pfffft. You’ll have to pay for each packet that you eat.

And tadah! Here it is: Babi Guling!

IT WAS SO… BAD. The roasted pork skin was like rubber and we had so much difficulty chewing off. Also, all the side dishes were terribly salty and so heavy on my tongue. My tongue was so numb after eating a few mouthfuls of it. I’m not sure if this is the actual quality of the dish or the chef was just having a bad day. I declare this the worst thing I’ve eaten in Bali for the entire trip and I am doubtful that I will re-visit if I ever come back to Bali one day.

Furthermore, it was extremely expensive for a relatively small portion. The total bill came up to 180,000 Rp for 3 sets and one keropok. By the way, you will have to pay for your driver’s meal as they will be stuck with you for the entire day.

Afterwards, we proceeded to Ubud Center to check out what they offer.

HAHA. Lots of penises were for sale in the market. I’m not sure what they mean though. Probably good luck or good offspring.

The paintings in Ubud are pretty well-known and it makes a good decoration at home. The colors used are pretty bold and the strokes are quite intricate.

Given the hot weather, we headed to an ice cream parlor for gelato. It’s situated right opposite the Ubud center.

Since there wasn’t much to offer at Ubud, we decided to continue our journey and headed towards Monkey forest which was a mere 5-10 minutes drive away.

And my god it was really Monkey Forest. There were SO MANY monkeys around! Also, if you’re fearless and wish to feed the monkeys, bananas are for sale at the entrance. But be careful as the monkeys will really cling onto you for the food. Also, the monkeys are considerably ferocious. We saw one climbing onto a lady and even attacking her and she was scared out of her wits.

A baby monkey clinging onto her Mommy! So cute!

I love this photo as it reminds me of how races and color doesn’t matter and we are all one big family as a human race. The Caucasian little girl looks pretty annoyed though and it makes the photo kind of hilarious. HAHA

The driver later drove us to a specialized painting parlor as he knew we were interested to purchase paintings. We saw this really stunning Buddha painting but it cost 1 million. Also, pictures are not allowed in the museum.

Along the way to Tanah Lot, we stopped again to see paintings. This was pretty nice too but not as good as the one we saw earlier.

After a 1-2 hours ride, we finally reached Tanah Lot.

Unfortunately, there isn’t much sunset to see as it was pretty cloudy that day. And oh my god there were so many people! Thankfully, the skies were a pretty sight as we started making our way to our second hotel.