It was 10am in the morning when I saw the Facebook message from my newly-made German friend. He had asked if I would like to get breakfast together and I promptly accepted.

This was the second proper sleep since I arrived four days ago. I was prepared to make full use of the day and get more dosage of Vitamin D since I was returning home in 2 days’ time. I had taken a trip down to Railay beach a few days back and was tempted to go kayaking to see the limestone rocks up close.

There was one catch though – I was scared as I was alone and feared for my safety.

Sharing my plan enthusiastically, I asked him to join and he agreed.

“Awesome, now I have a companion and I feel more assured” – That was my thought.

Good times only last temporarily. Time passed as I savored my 100-baht fried rice and I soon realised that the plan was not going to hatch… He was having too terrible a hangover. It was such a hilarious sight; he was in a mess and struggled to sit upright as we had our chat. Often, he had to find a place to lie on his back as I watched on laughing and thinking of the ridiculousness of this.

I left for Tonsai beach after helping him settle a new accommodation. He was to take a nap and we will unite again later in the afternoon. Taking a longtail boat for 100 baht, I was soon setting foot on the beach.

This was it. I wasn’t going to let fear get in the way. While I have only kayaked once many years ago and was doubtful with my own skills, I wanted to do it badly. It was an adventure that I have to take.

Soon after, I arrived at Tonsai beach. 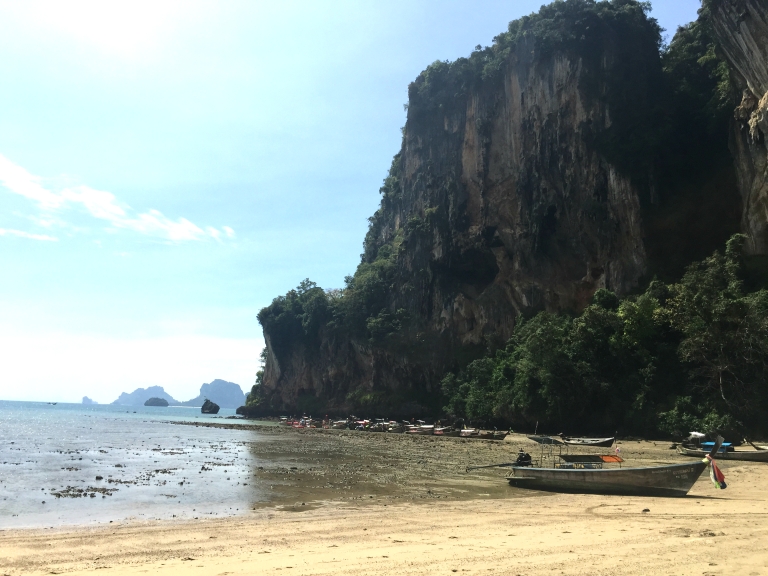 It was beautiful! There were significantly less people as compared to Railay. 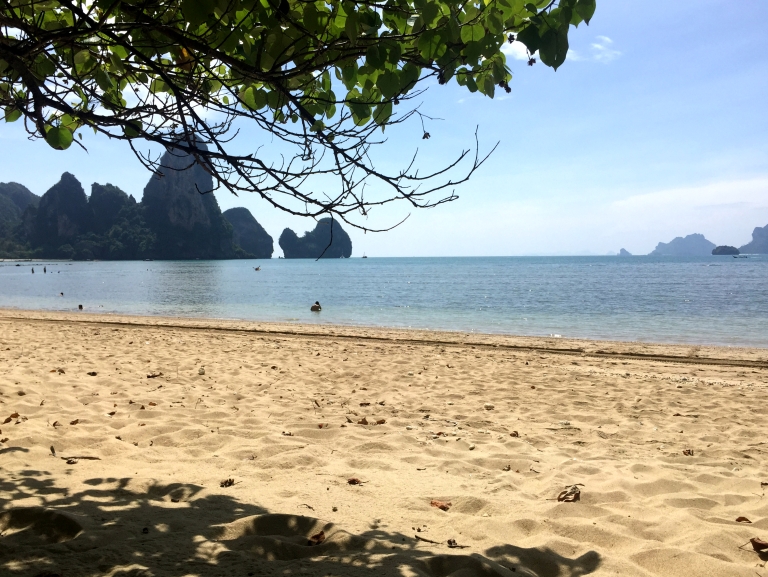 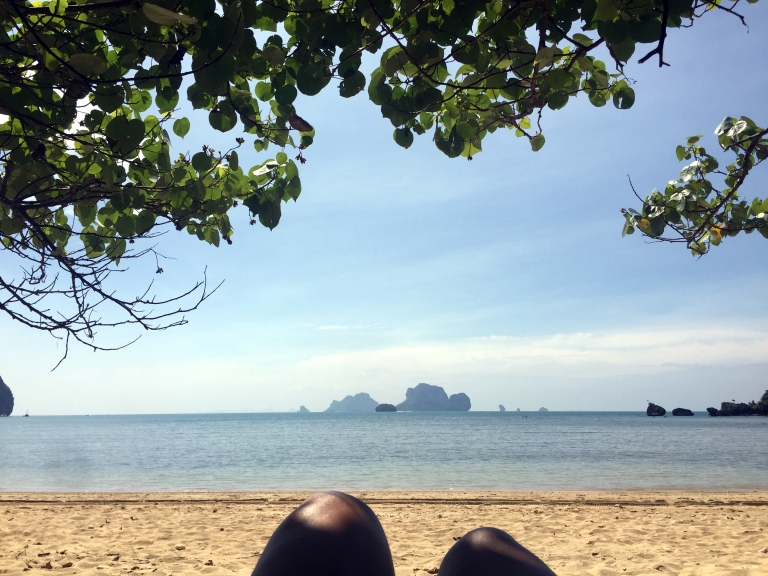 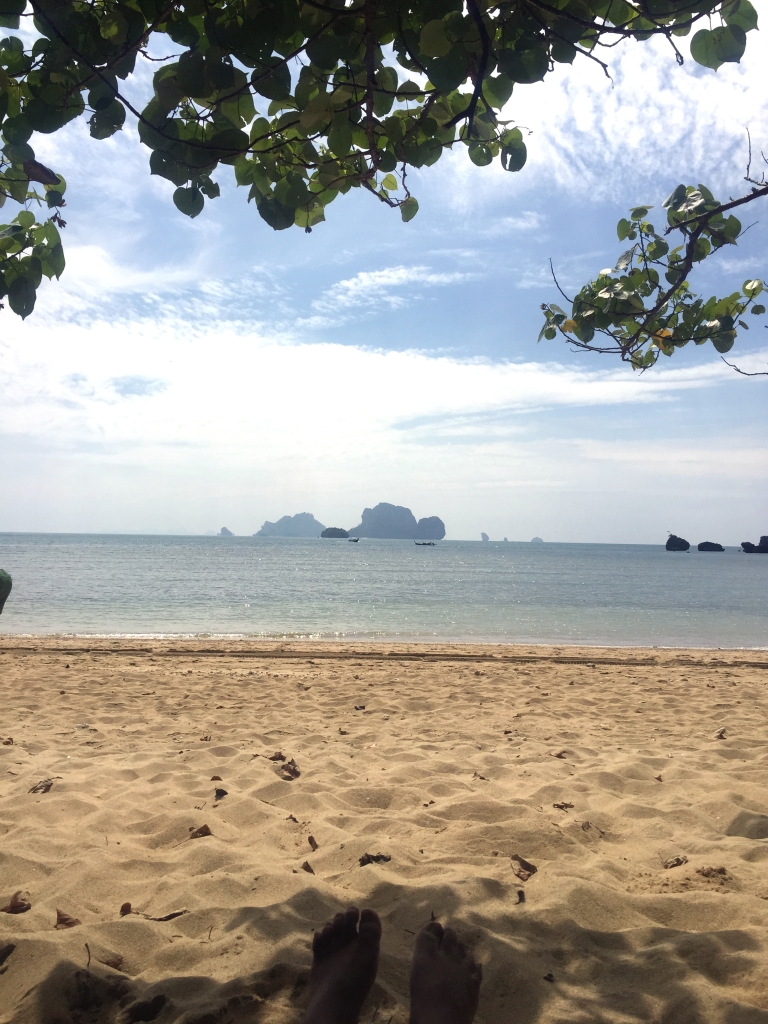 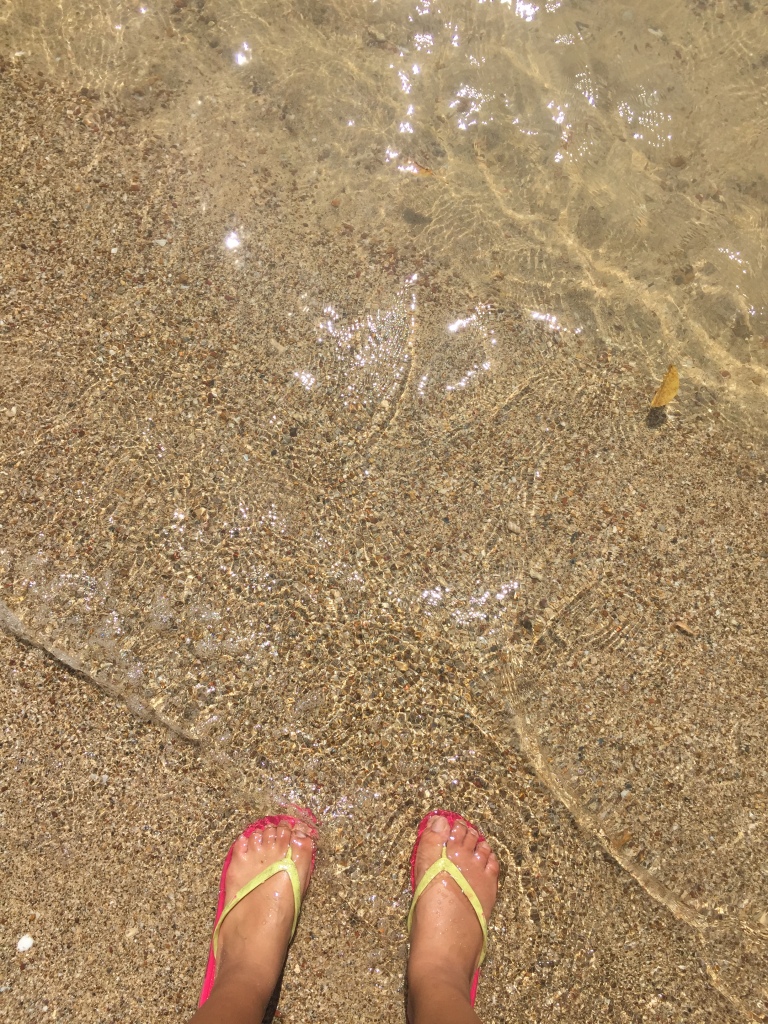 It was the perfect day to bum around at the beach.

After a short rest, I set out on my adventure. My heart was thumping as I struggled to paddle on the water. As it was low tide, I could feel my kayak brushing against the rocks. It took me 20 minutes before I was finally on a good surface level.

I was breaking out in sweat while the sun beat down mercilessly.

At this point of time, I was feeling the sore in my arms as I paddled on choppy waters and battled my inner insecurity.

And boy, it was so difficult juggling my paddle while holding on to my iPhone trying to take decent photos. I was worried that I would drop my paddle while shooting away and constantly rehearsed the scenarios in my head. 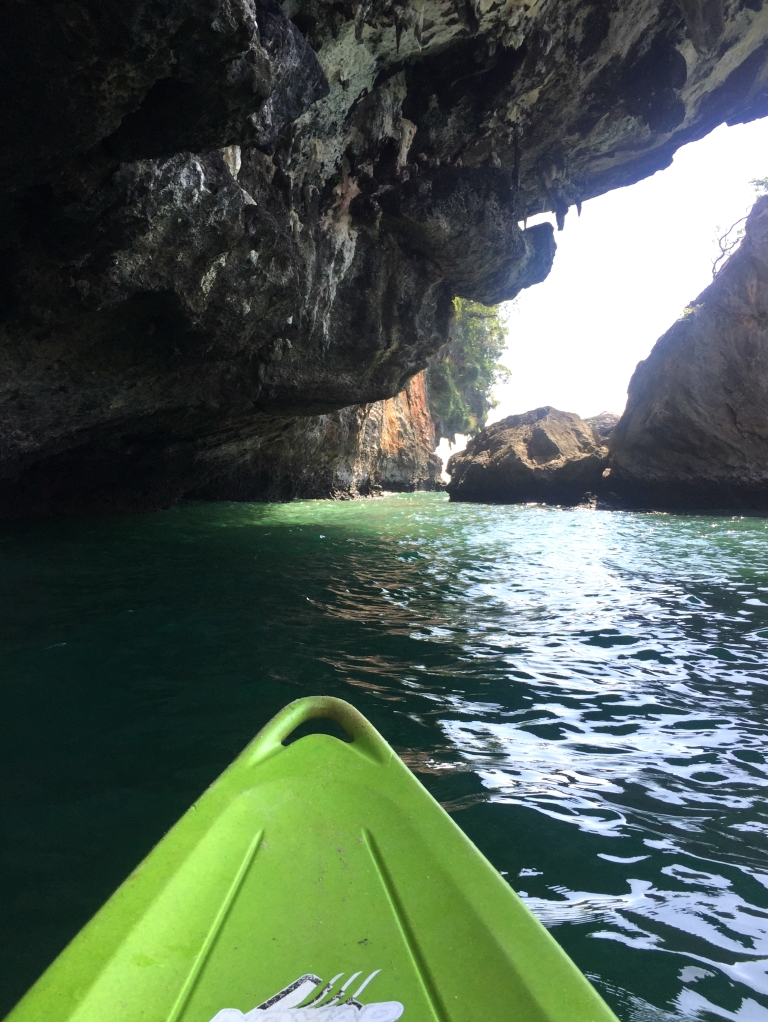 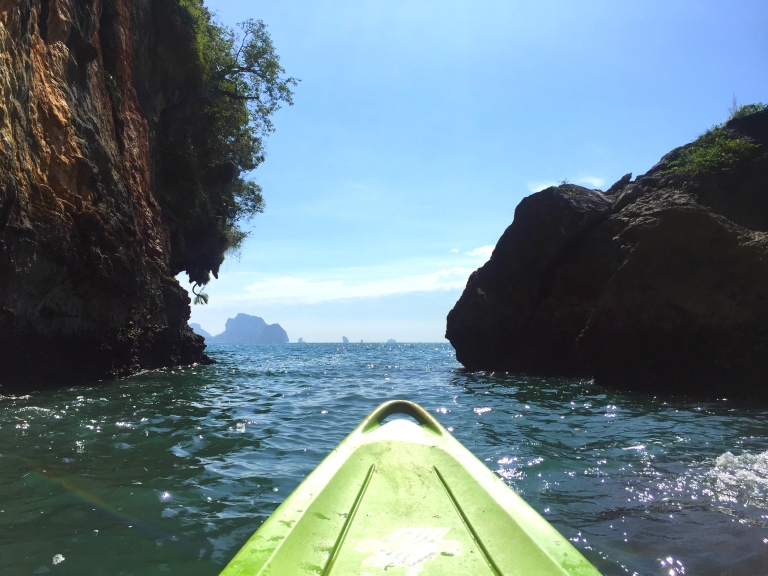 I had paid 100 baht for an hour for the kayak. In fact, I used it for over 2 hours but wasn’t made to top up when I returned. #cheapthrill

Off for the next small adventure to Railay beach. I’ve heard that it was connected via a 10-minute jungle trail.

Fun fact: My foot was fractured 3 weeks ago and I was basically travelling with a walking cast (Yes I brought my cast along in my backpack!). But the defiant spirit in me removed it whenever I wasn’t sleeping. Vigorous activities were a no, not to mention travel but I couldn’t care less.

But the trail was terribly difficult.

Parts of the trail were steep and sometimes I was on all fours. Also, I had to avoid exerting too much pressure on my broken foot as I scaled on.

Thankfully, this was the view that greeted me. It was amazing. 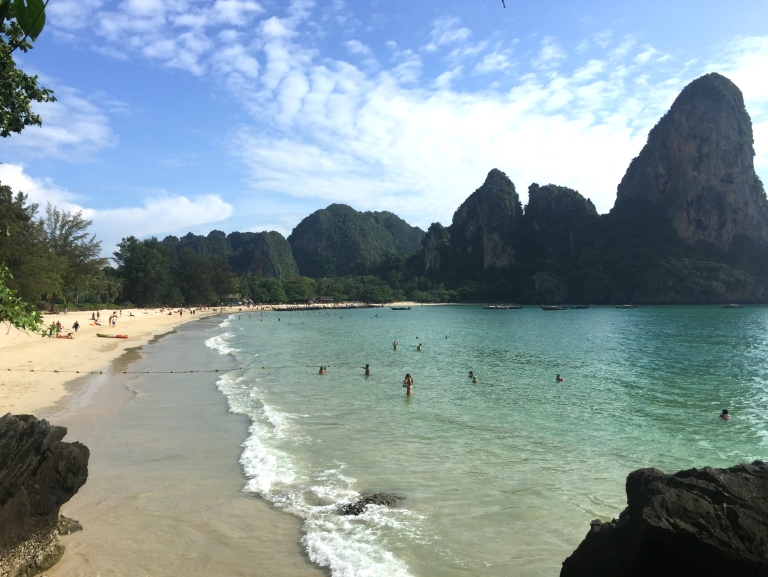 The first stop in Railay? Food.

While I was slurping my bowl of noodles, the German friend who was suffering from his terrible handover finally came. This time round he was more well-rested as I saw energy returned in his eyes.

This kayaking trip was intimidating but it was something I wanted to try out and I’m so glad I didn’t let fear or insecurity hold me back. The feeling is even more intense and definitely more physically draining when you’re all by yourself out in the open sea.

It was an experience I would never regret – I had conquered my fear.

One thought on “Krabi, Thailand – Kayak Adventures On Tonsai Beach”