Our morning on day nine was spent travelling from Ho Chi Minh to Mui Ne. We had heard good reviews of the Mui Ne Sand dunes prior to our trip and thought that it would be a great idea to head down. A train or bus journey would take us 4-6 hours and it would not make much sense to do a 1-day trip.

A bus ticket to Mui Ne costs 135,000 VND each. This company that we had patronized is a more reputable bus company. Remember to check the rates around! We only realised that a rival company that was equally reputable had offered tickets at 105,000. A bottle of mineral water, and chilled wet paper towel is also provided onboard.

This was not the most comfortable journey as there was a Vietnamese blasting her music for two hours and any thoughts of getting a rest had to be abolished. On top of that, there was a kid making lots of noise throughout the journey.

We were speaking in Chinese with one another when another passenger onboard initiated small talk with us. He encouraged us to speak in English instead as the Vietnamese are not fond of Chinese people. Stranger-turned-acquaintance added that Vietnamese tend to charge Chinese more when they hear that they’re from China.

So I dug up some research to find out why:

1. Vietnamese feel that the Chinese look down on them

2: Various historic invasions such as the Sino-Vietnam Conflict in 1979

4: Unethical business practices by the Chinese – Eg: Production of toxic products and exporting them to Vietnam, harming the locals

Our bus driver dropped us in front of the hotel and we had to walk 200 meters up the hill. Imagine 12kg of load on your shoulders as you climb the hill.

But lo and behold! The hotel staff upgraded our budget room at Mui Ne Hills Budget Hotel to a Junior Suite at Mui Ne Hills Villa Hotel! We were not expecting much from it but we were so mesmerized the moment we opened the door to our room.

This turned out to be better than striking lottery. It was so much bigger than expected! 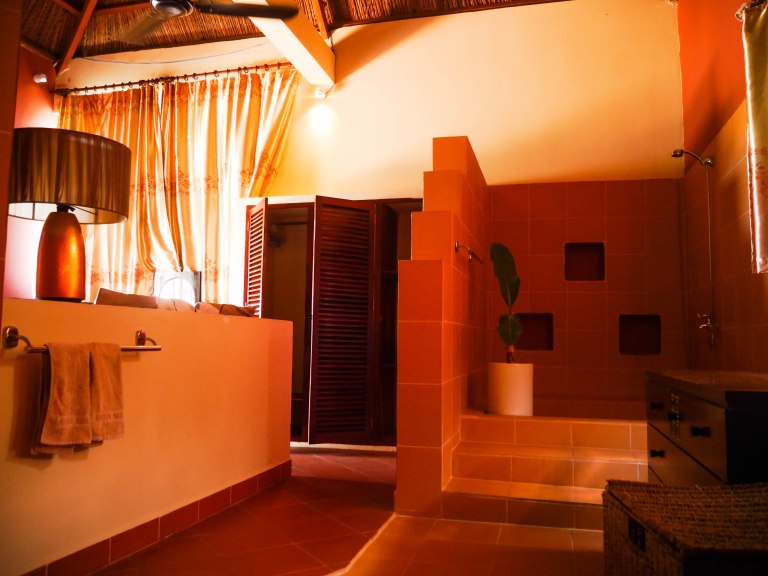 There are two shower areas in the room, one of which can be used as a bathtub.

What was the most impressive was this million-dollar view:

You can also easily access the other pools under Mui Ne Hills. 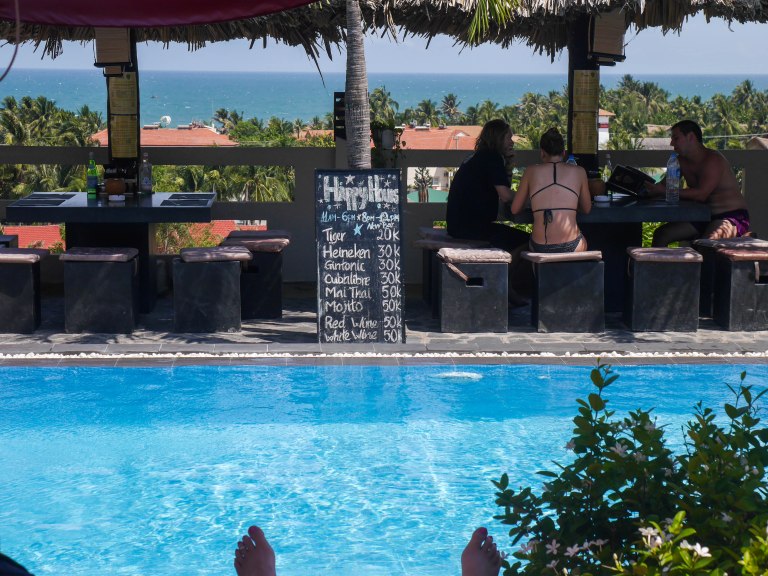 We merely paid 12 usd for our room, only to receive something much better in exchange. I can’t guarantee that everyone will be offered a free upgrade, but it seems like Mui Ne Hills has the practice of offering free upgrades in exchange for a review on Tripadvisor.

Wake up to clear blue skies, turquoise-green waters, and shimmery swimming pool. This is an experience like no other. I would gladly top up more just for the view if I were to revisit Mui Ne Hills in future.

The service we received from the front desk staff was prompt and efficient. They spared no efforts wasting time and check-in was almost immediate. This was very considerate as the weather was scotching warm as we waited for our turns to check in.

We signed up the tour with them at 10 USD each to watch the sunset over the sand dunes. It was not made known to us that the amount that we had paid did not encompass entrance and miscellaneous fees. All 4 of us on the jeep were rather disappointed to know that we had to fork out extra if we wanted to enter the Fairy Stream, or ride the motorbike to see the red sand dunes.

The most disappointing of this stay had to be the faulty aircon that dampened our spirits. It was working fine one moment and breaking down the next. There was no one at the counter to assist us that night and poor J had to use Google Translate to borrow a fan from the security guard and then lug it up 2 stories to our room.

12 USD* per night inclusive of taxes and booking fees via Agoda.com